Europeanquality standards in the heart of Africa 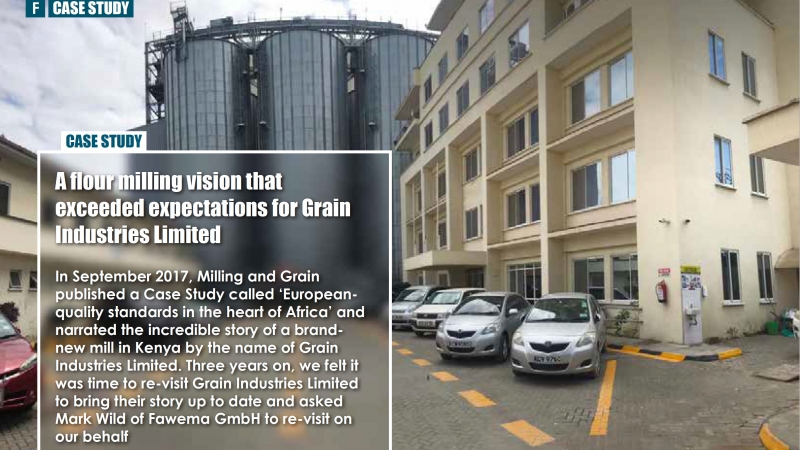 Fact is often stranger than fiction as they say in storytelling. And Mark Wild, who is Fawema’s Africa sales manager, experienced that first hand when recalling the original feature published by Milling and Grain in 2017.

“That original article began by colourfully describing my first meeting with Mr Munir Thabit the CEO at Grain Industries Limited,” Mark recalls. It was so intriguing we recall it here.
‘Night has fallen in the port city of Mombasa, Kenya. The crickets are chirping in the acacia trees, the heady perfume of exotic foods being cooked over open fires fills the hot, humid East African air.

‘The chaotic daytime traffic has finally subsided and peace gradually descends on the dusty city.
‘Suddenly, the silence is broken by the shrill sound of a car horn. A taxi has pulled up at an anonymous gate on an equally nondescript piece of land close to the harbour and a suspicious night watchman tentatively opens the gate to enquire who on earth is asking permission to enter at this late hour.
‘Access is granted and the taxi slowly drives in.
‘The plot is shrouded in almost total darkness, the long grass wildly overgrown and the sounds of nocturnal animals and grass snakes scattering in panic to avoid the approaching vehicle can be heard all around. A dim light powered by a small, spluttering generator shines out from a portacabin office which is nestled in the furthest corner of the overgrown field and inside, busily working at a laptop computer, sits a man who is about to enlighten me with a truly fantastic vision.’
“That first meeting took place on a Sunday night in November 2014.

“Ground clearing started the very next day as I recall, and the mill was finally completed and commissioned in August 2017,” says Mr Wild.
The facility, a 750 tonnes per day Buhler wheat mill gave Grain Industries Limited an immediate strong foothold in the highly competitive Kenyan market. Since then however, the mill has undergone expansion and today, in late 2020, it has a daily capacity of 2250 tonnes on wheat and a further 400 tonnes daily on maize.

Event recreated in a virtual world
Three years on from the inauguration of the plant, we wanted to re-create that first surreal meeting in order to ask Mr Munir Thabit some questions about the journey so far: so we pulled the old portacabin office out of storage, dusted off the rickety wooden desk and launched a ‘virtual’ question and answer session: Grain Industries Limited (Re-visited)!

Mark: Munir, when I first met you on that night back in 2014, I must admit that I had a few reservations that such an ambitious project could be realised in such a short time-frame. The moment you began to explain in great detail to me nevertheless, about how the mill would be built, managed and operated, I was hooked.
Did the planning phase of the mill undergo many revisions or was the original blueprint followed entirely and what was your single biggest challenge?

Munir: Execution was per plan. We knew from the outset that the plan had to be meticulously drawn-up and it was. Nothing was left to chance and no corners were cut. Our biggest challenge was meeting customer demand in the initial phase immediately when we started milling and packing. We under-estimated the volume of sales and we had perpetual stock outs.

Mark: Now you´ve recently completed an expansion, would you say that your objectives have been achieved?

Munir: On balance, with God`s grace and a very committed team, our objectives have been realised. As already stated, our installed wheat mill capacity has tripled from 750 tonnes per day to 2250 tonnes per day, although we are not at full capacity utilization.
Our wheat bran customers are located in export markets in the Middle East and Asia and we are constantly increasing this side of the business. Moreover, we have diversified our product portfolio by commissioning a 400 tonnes per day maize mill.
Since our planning was automation from the outset, our head count has increased marginally. Quality has been one of our pillars hence the Food Safety System Certification 22000 (FSSC 22000; latest version) in January 2019, one and a half years from GIL´s inception.
The latest version of FSSC 22000 is very stringent and I am not aware of any miller in Kenya who has achieved this. In addition, our brand “Ajab” has recently been awarded a “Super-brand” status.
In our three years of operations, we have won the Best New Business of the Year Award 2017 within four months from the start of our operations, the Best Customer Focus Company of the Year 2018 and the Best Growth Strategy of the Year 2019 awarded by the Kenya National Chamber of Commerce and Industry (KNCCI)- Coast Chapter. Not to forget, we were also second runners-up as the Best Employer of the year 2018.

Mark: Of your total flour output, both wheat flour and maize flour, what´s the divide between consumer packs (500 grams, 1 kg and 2 kg) and your industrial-size sacks for sale to bakeries and other industrial users?

Munir: In the Kenyan market the vast majority of sales is in the smaller SKUs and Fawema packing machines have been our choice. The consumer packs account for the biggest part of our business by far.

Mark: The reason for our original meeting was of course to discuss your packing requirements. Today you operate 14 Fawema high-speed packing lines for packing consumer-size flour into ready-made paper bags, what are your output figures?

Munir: Each of our Fawema machines packs a hundred bags a minute!

Mark: 19 of the top 20 countries for population growth rates are in Africa. As a leading African company providing staple food to a growing population, what does this statistic mean to you?

Munir: This presents opportunity for growth in the future. At the moment there is a huge over capacity in both the maize and wheat milling business in Kenya.

Mark: All of your consumer packs are in paper bags. Have you ever considered plastic packaging materials?

Munir: The Kenyan market has always been a ‘paper’ market with regards to consumer-size packets of flour. There are good local suppliers of paper bags who use European or South African paper and are able to print attractive and colourful graphics on the bags which appeal to the buyer. Since a few years, the Kenyan government has also introduced legislation to discourage plastic packaging when and where possible.

Mark: Finally, Munir if I may, I would like to ask you how Covid-19 has affected your business this year?

Munir: Being in a third world country there doesn`t exist a comprehensive first world social/economic safety net for the vulnerable. It is apparent that the pandemic has been a global problem resulting in depressed demand. Kenya is by and large a primary producer. The external global lockdowns have affected exports of our horticultural products and tourism receipts resulting in a shrinking of the economy. This translates to lower demand, lower customer credit scores and lesser risk appetite.
However, the outlook for 2021 looks promising as the pandemic curve is past its zenith in this part of the world. Fingers crossed!